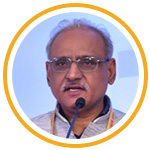 Consumption of vegetable oil will be near record in India in 2021/22 MY, declared the President of Sunvin Group, Sandeep Bajoria within the online conference Fat&Oil Industry-2021 organized by APK-Inform on November 3.

He added that the Indian government has declared mission for increasing the domestic supply of vegetable oils. Therefore, they expect the government to take strong measures in this direction in coming 5 years. Hence, Sunvin Group expects the import of vegetable oils will stop rising beyond 16 mln tonnes per season for next decade.

Fat-and-Oil Industry-2021 to be held in double format