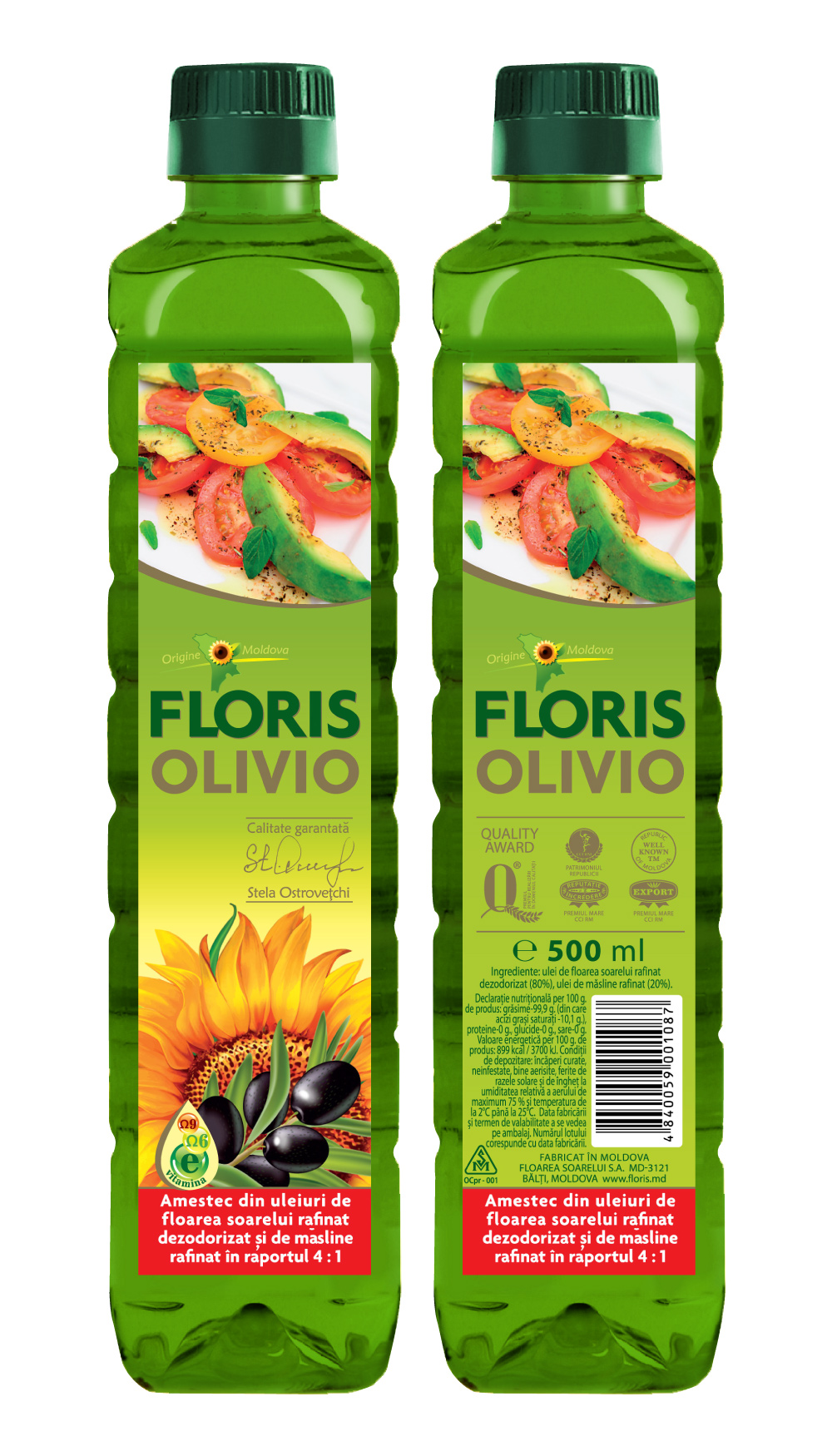 In the height of summer, Trans-Oil Group of Companies just started producing a new astonishing off-season product at its fat-and-oil complex FLOAREA SOARELUI SA — FLORIS OLIVIO, which is the blend of sunflower and olive oils in the convenient bottle type of 0.5 liters.

According to the company's technologists, it is the top-quality product. The vegetable oils mix includes the basic product of the company Floarea Soarelui — refined and deodorized sunflower oil FLORIS (produced by the enterprise for almost two recent decades, and which technologies of production were brought to perfection), with added olive oil. The company imports olive oil from Greece — the EU country, which agricultural sector is associated with the great Mediterranean triad for millenniums: olive oil, cereals and grape wine.

The blend of FLORIS OLIVIO includes sunflower oil and olive oil in the ratio of 4:1. On the one hand, the reporting ratio provides the Moldavian consumer with the traditional set of vitamins (in particular, group E) contained in sunflower oil, and on the other hand, it enriches the product with the useful and delectable Mediterranean flavour.

In addition to the more balanced composition and higher nutritional content, the cost of the reporting sunflower-olive oils mix is cheaper than 100% olive oil. But it justifiably claims to the status of the premium product.

Moreover, the consumer will be able to enjoy the benefits of the product universality — FLORIS OLIVIO can be used without any losses of consumer characteristics, both in the process of product high-temperature treatment — cooking and frying, and for dressing of raw vegetable salads.

As a reminder, last summer the company Floarea Soarelui also offered the issue-related new product to its Moldavian consumers — crude sunflower oil FLORIS RUSTIC. In addition, the product is available in the ergonomic "garden-picnic" bottle of 0.5 liters, and it is marketed as the premium product, which has already become a success with the high-skilled chefs of Moldova. At the same time, FLORIS RUSTIC is the flavoured and bright "subject matter professional": oil for salad dressing, but not frying.

In addition to FLORIS OLIVIO and RUSTIC FLORIS, on the Moldavian market the Floris product line also includes the well-known, classic, refined and deodorized sunflower oil FLORIS. In the nearest future, a number of new products of Floarea Soarelui SA will appear on the supermarket shelves — spicy and extremely appropriate for highly seasoned dishes on a hot August day, sunflower oil with spices. It is the bright oil for all intents and purposes — FLORIS CHILLI — with hot red chili pepper and allspice black peppercorn, as well as oil with garlic — FLORIS MUJDEI.

For several recent years, Floarea Soarelui realized a series of large-scale projects on the production modernization — reconstruction of workshops was aimed at improving of the products quality, and focused on the growth of its sales not only in bulk, but also in rather convenient packaging. Therefore, the Moldavian consumers significantly increased attention to packaged sunflower oil of the company. Also, the Chamber of Commerce and Industry of the Republic of Moldova awarded the company for achievements in the sphere of quality-2010. In the short term, modernization of the quality infrastructure of Floarea Soarelui created the required conditions for the company to start realizing the program of increasing of sales of packaged sunflower oil on the high-margin western markets — in the European Union, and the large-scale Eastern markets — to the Middle East and China. At the same time, the Floris product range certainly have rather good export potential, said the General Director of Floarea Soarelui SA, Stella Ostrovetchi.

Also, it should be noted that the highest quality of the consumer-oriented products of Floarea Soarelui is confirmed by the certificate of the most reliable international safety and quality management system ISO 22000, which the company already approved after the recent inspection at the enterprise in the current year.