Competition and fight for the sales markets to continue. It is important to keep moving — Ukroliyaprom 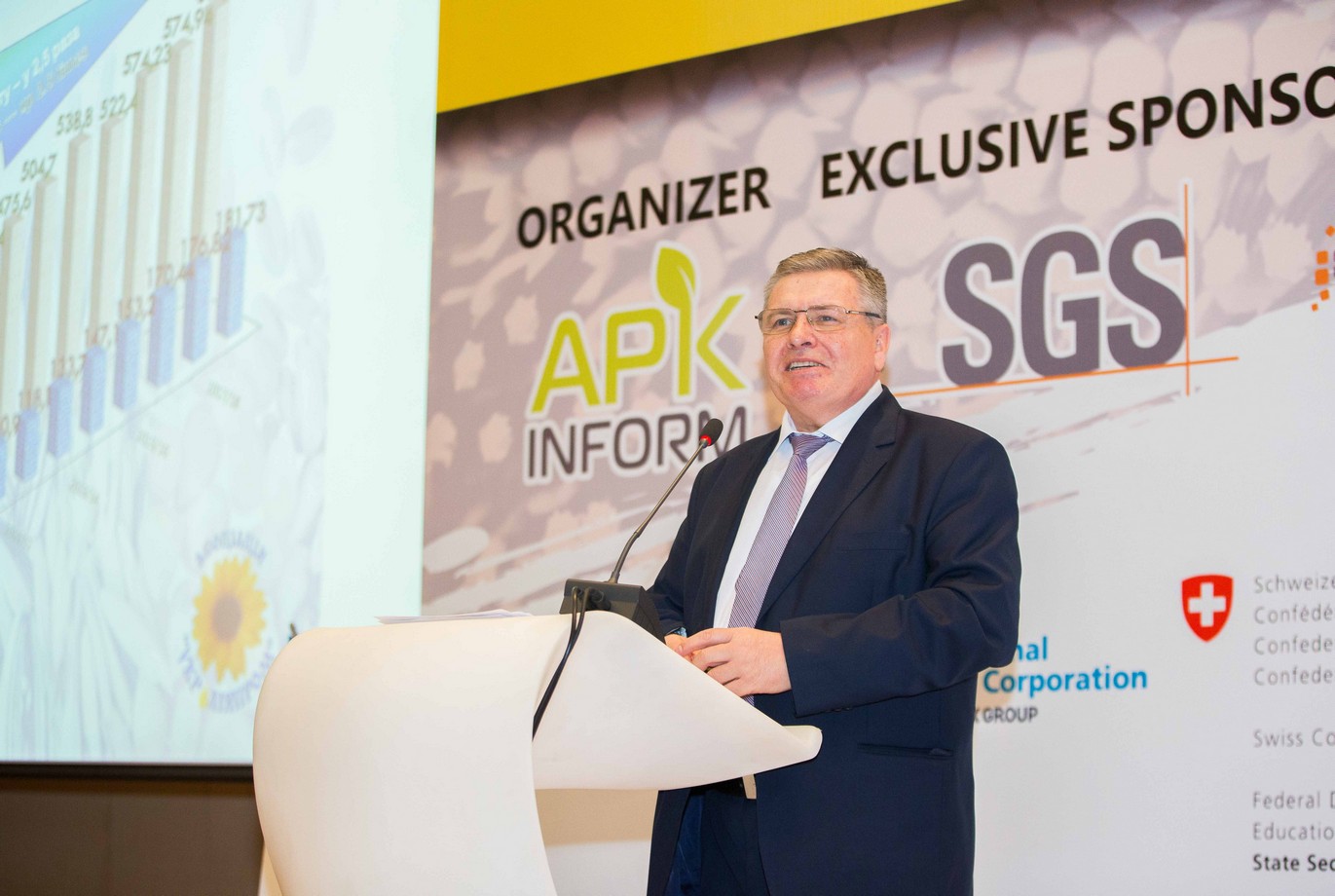 More than 20 years of the productive work of the specialized fat and oil association Ukroliyaprom have brought the obvious results: Ukraine has obtained the status of the largest global producer and absolute leader among the exporters of sunflower oil, the quality of which is recognized by more than 124 countries around the world. APK-Inform asked the General Director of Ukroliyaprom, Stepan Kapshuk about the progress made, the contribution and the further expectations of the industry development.

— Stepan Pavlovich, the association Ukroliyaprom was found 20 years ago and You are the General Director of the company for 10 years. We doubt there is anyone who doesn’t know about the achievements of the association, but still, please, tell us about the key turning points for the industry.

Last year, the association Ukroliyaprom celebrated its 20th anniversary. This a real global event for the team of the great page of history of the oil and fat industry of Ukraine. Since the association was founded it witnessed some economic crises, change of the presidents of Ukraine. But the association, that united the largest manufacturers, managed to live through this difficult path and made the fat and oil industry of Ukraine the leading one both in Ukraine and on the global market. This date is a good chance to evaluate what has been achieved.

It is necessary to remind the period when the association was founded. 1998 was a period of the drastic changes in political, economic and cultural life of the country. The collapse of the Soviet Union and, of course, the planned economy slowly but confidently created the better understanding by the professional area of the necessity to create wider democratic transition of different branches of the economy and find the new professional movement instead of the soviet and in fact nominal unions. At that time, the professional public unions were absolutely new for the market.

The newly founded association Ukroliyaprom at that time had to adapt to the new realities of the economy, to look for the relevant formats of collaboration, to set and solve absolutely new tasks. The main among them was the renewal of the work of the Ukrainian fat and oil industry, which was almost destroyed by 1998 as a consequence of the fact that the country was a mere supplier of raw materials to the global market of sunflower seed.

To date, we can confidently say that for these 20 years thanks to the association activity the fat and oil industry of Ukraine not only has “gotten up off its knees” but also obtained a status of the largest global producer and absolute leader among the exporters of sunflower oil, the quality of which is recognized by more than 124 countries around the world.

Thus, the association by deed not by word proved its effectiveness and it is rightfully considered to be the most effective among other similar unions.

— The implementation of the export tax for sunflower seed was one of the greatest success of the association which allowed the fat and oil industry of Ukraine to develop and reach the current success. Please, share Your vision of the further development of the industry (in terms of the maintenance of the duties, their increasing/lowering, or cancelation).

To date, the fat and oil industry comparing with others is one of the most successful, which actively earns foreign currency inflows for the economy. Ukraine is the country No 1 in the world in terms of the sunflower oil export. But this industry has not always been the profitable one. Until two decades ago, many industry enterprises were considered to be in crisis.

This means that the country, which was cultivating sunflower seed on thousands of hectares, had not enough of domestically produced oil and had to purchase it overseas. So, I believe that the renewal of the fat and oil industry became one of the main achievement of Ukraine. This can be an example of the wise policy. At the time there were people who supported the industry, and I can give their names: deputy of the chairman of the State food industry, later the first director general of the association Ukroliyaprom Ludmila Zinchenko, and Alexandr Moroz, Ekaterina Vaschuk, Oleg Yukhnovskyi – they were the deputies of the Verkhovna Rada of Ukraine. They understood that the country cannot become just a “mere republic”, it should not export the raw materials when they can be processed in Ukraine. Then the idea came to implement 23% export tax on sunflower seed. Many were saying: “Think about the consequences! We will drown in this oil not knowing where to sell!” But the live has proven that the export tax particularly and the further spur of the country to develop have become the kernel of the restoration of the fat and oil industry. Ukraine not only has become the leading exporter of sunflower oil but also sunflower seed became the most profitable crop. No one push the agrarians to plant so many of the oilseed. But there are financial incentives. That is why, the planted areas under sunflower seed increased from 2.5 mln ha in 1998, to more than 6 mln ha in 2018, and the production of sunflower seed for this time increased from 2.3 to more than 14 mln tonnes.

So I believe it unacceptable to rise a question of the cancellation of the export tax for sunflower seed. I would call it anti-governmental position to give the raw materials that are of great interest inside the country. No one abroad demands from us to cancel 10% export tax for sunflower seed apart from the separate our law-makers. Why would we do it?

— Stepan Pavlovich, I know that You (Вы душой и сердцем переживаете за отрасль). And of course You want a successful future for the industry. In Your opinion, what are the reasons of the industry success, what is Your ideal?

We can evaluate the performance of the industry differently. But whatever somebody has said, now the industry is export-oriented, there are many jobs created inside the country, there is a stable dynamics of the development. There were new facilities lunched, investments, and the investments mean development. There is a balance of the interests. The farms plant sunflower seed, because the crop is profitable, and the processors build plants, expand the capacities because it is profitable. And the main is that the demand for Ukrainian sunflower seed increases from year to year. Even in China, India the local agencies write: “Ukrainian sunflower oil is good for health”. I surprisingly discovered it when I was in China.

We believe that over the life of the association the main tasks set before were fulfilled, including the increase of the raw material base, the assortment of the fat and oil products, increase of the export potential, technical improvement of the industry.

Since 1998, there were 64 new enterprises built, including 48 powerful extraction plans, 16 terminals (up to 90% of the oils are transported by sea), the industry received $3 billion investments; the plants modernize. There were 100 thsd jobs created.

The processing capacities launched in Ukraine allow to process all the oilseeds produced (soybeans, rapeseed, sunflower seed). However, due to the massive export of soybeans and rapeseed the capacities are under-loaded, taking into account that the Ukrainian oils (soybean and rapeseed) and meals are of high demand abroad, including EU countries. Our producers and exporters of oils and meals can satisfy the contracts for the products on the domestic and foreign markets.

The competition and fight for the sales markets have been, are and will be. It is important to go on, to develop and offer more quality products at the competitive prices.

The production of sunflower oil for 20 years of the association existence has increased by 15 times, and the export by 30 times. The main result is a positive dynamics of the constant development of the industry.

The task of the association is the uphold of the interests of the industrial enterprises in order to provide their effective functioning and development. From year to year this task becomes more complex for many reasons, but often it is connected with the change of the political and the economic course of the government, change of power, etc. Of course, many depend on the political course of the government – both the industry development and the government in general, but mostly I believe the economic development depends on the proper management.

Every society, every organization and industry has to have its center, kind of headquarter, which not only will forecast the strategic development of the industry, but also will be capable to solve problems.

Experience has shown, that the headquarter of Ukroliyaprom is the general management, which I chair for many years (the position is elective).

India remained the importer No 1 of Ukrainian sunflower oil. In 2018/19 MY, India imported 2.15 mln tonnes of the product, which is 36% of the total export from Ukraine.

The growing demand for sunflower oil on the Indian market, due to the population growth, allows assuming that there will be no reduction of the sales.

— In the short-term perspective Russian soybean and sunflower meals will be offered to Chinese market. How this tendency will influence the deliveries of the Ukrainian product to China?

In 2018/19 MY China became one of the main importers of Ukrainian sunflower oil (second after the EU). China imported 1.1 mln tonnes of SFO from Ukraine, which is 22% of the total export from Ukraine.

There is an increase of the demand for Ukrainian rapeseed meal from China.

As I already told about the Indian market, the demand from the Chinese market, due to the population growth, will allow consuming both the Ukrainian and Russian products.

— In conclusion of our conversation, please let me clarify the question of High Oleic sunflower seed and oil, which earlier were considered the niche market and now are the full-scale market players. Please, share Your estimations of the prospects of this market segment development.

Ukraine has already formed the full market of HO sunflower seed and UkrOliya company can be an example of the development strategy, which started to deliver own made HO sunflower oil to the USA. This can be explained by the fact that the volumes of production of the organic products in the US are too small to fulfill the growing demand and this market is one of the most prospective for the exporters.

According to the forecasts of Syngenta company, Ukraine can become the largest exporter of HO sunflower oil on the global market.

Homepage | Exclusive | Competition and fight for the sales markets to continue. It is important to keep moving — Ukroliyaprom
See also