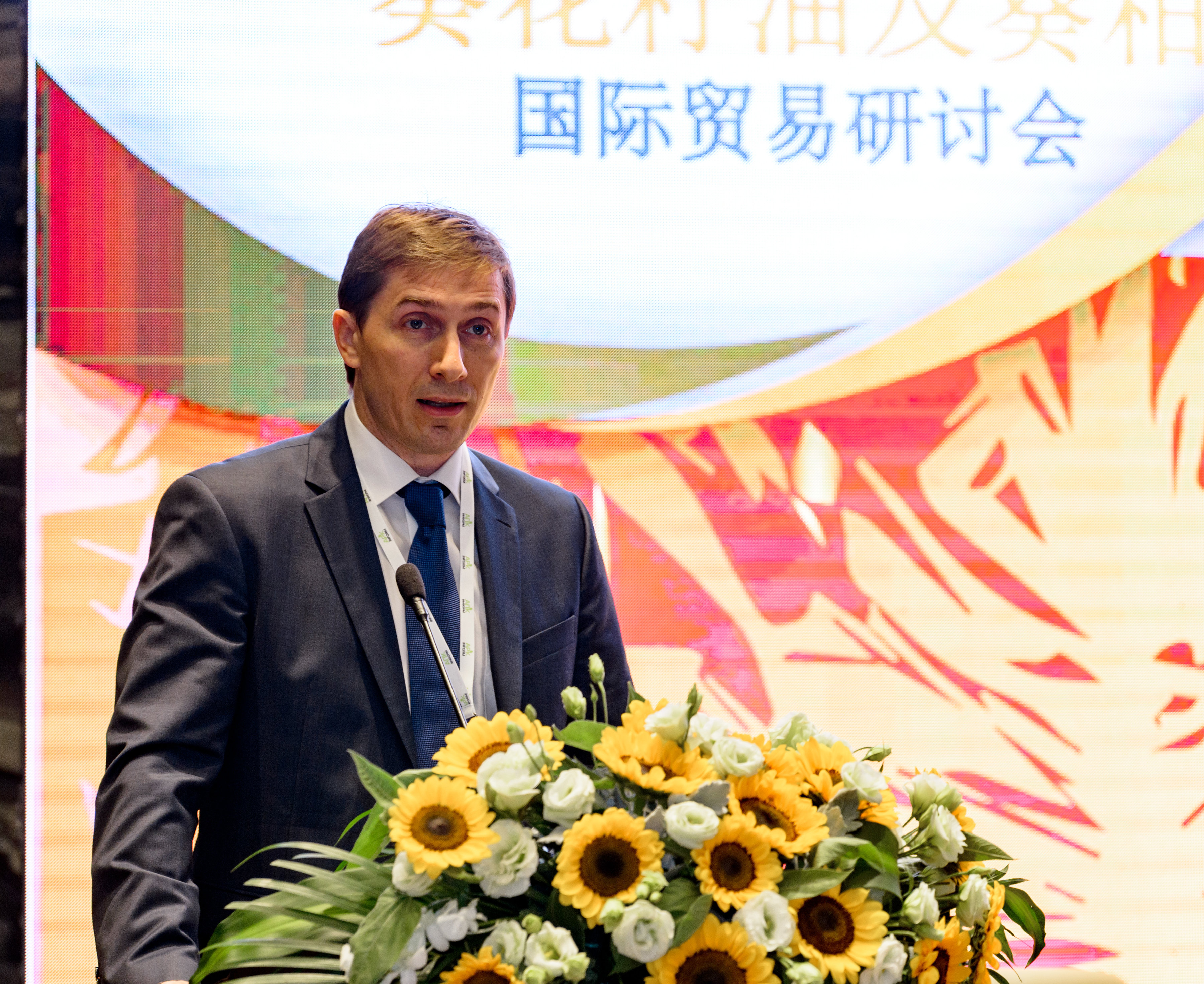 Russia is considered as the 2nd largest global producer and exporter of sunflower oil, after Ukraine. With the increase of the processing capacities in Russia, the country also increases its share on the global market. APK-Inform Agency asked the Director of oils and meals trade company EFKO, Anton Gritsai about the trends of the Russian sunflower oil industry and the prospects of its development in 2019/20 MY.

EFKO company ranks among the main producers of food industry in Russia, and is the largest fat-and-oil holding on the market of Eurasian Economic Union. The principal activities include: oilseeds processing, the production of the specialized fats and margarines, bottled oils, mayonnaise, ketchup, dairy products. The processing capacities of the company are located in the main regions-producers in Russia and Kazakhstan with the general production capacities reaching 2 mln tones. The general storage capacities of oilseeds total 1 mln tonnes.

— Anton, to start with, please describe the general tendency of the oilseeds market development in Russia for 3 recent season. What features would You note?

— Together with the oilseeds production growth, what are Your forecasts towards the exports/imports in 2019/20 MY?

According to our forecasts, in 2019/20 MY Russia will increase the imports of oilseeds to 2.55 mln tones (+33% y-o-y), and the export will increase by nearly 75% and will reach 1.73 mln tonnes. At the same time, the imports and exports of sunflower seed will not change.

The volumes of oilseeds processing continue increasing from year to year. In particular, if the production of the vegetable oils in 2016/17 MY totaled 5.57 mln tonnes, in 2018/19 MY this figure increased to 6.59 mln tonnes. Herewith, the domestic consumption remains rather stable – nearly 3 mln tonnes, which allows to Russia to increase the exports of the veg oils. According to our estimations, the export of these products in the last 3 seasons increased by 23% – from 2.48 mln tonnes to 3.06 mln tonnes. Herewith, we expect that the upward tendency of the exports will keep in 2019/20 MY, and the export volumes can reach 3.33 mln tonnes.

The production of Russian sunflower oil in one year can increase by 8% and in 2019/20 MY can reach 5.47 mln tonnes, and the domestic consumption will remain rather unchanged. Thus, by the end of the current season Russia can export up to 2.5 mln tonnes of sunflower oil, up 20% compared with 2018/19 MY.

— Which countries are the main importers of Russian sunflower oil, and do You expect for the exports to increase and/or decline in 2019/20 MY?

— What Russian companies are the largest suppliers of sunflower oil on the global market, and what is the share of EFKO company?

The main companies-exported of sunflower oil from Russia are: Aston, EFKO, NMGK group of companies and Cargill. For several last seasons, the general export volumes by these companies increased from 667 thsd tonnes in 2015/16 MY, to 1.4 mln tonnes in 2018/19 MY. Herewith, the largest deliveries’ growth was demonstrated by Aston and EFKO.

— India is one of the main importers of veg oils in the world. How do You estimate the prospects of the Russian sunflower oil exports to India in 2019/20 MY?

If we speak about the export of Russian oil to Indian market, its share is significantly lower compared with the Ukrainian. For example, in 2017/18 MY the general imports of sunflower oil to India from Ukraine and Russia totaled nearly 2.47 mln tonnes, of which Russian oil deliveries totaled 18 thsd tonnes and Ukrainian — 2.45 mln tonnes.

In 2018/19 MY, the deliveries of sunflower oil from Russia to India increased to 89 thsd tonnes, and from Ukraine — 2.5 mln tonnes.

We hope that the improvement of the sunflower oil production and its quality will lead to the increase of the export deliveries from Russia to India. We forecast that in 2019/20 MY Russia has a potential to export up to 200 thsd tonnes of sunflower oil to India.

— What seaports do export Russian sunflower oil to India?

I should note that EFKO company recently has increased the capacities of sunflower oil hydration and now is ready to deliver up to 35-40 thsd tonnes of the product per year via Taman seaport.

— What is the general carrying capacity of the seaports in Russia in the Azov-Black Sea basin in terms of oilseeds and by-products deliveries?

Today, the delivery of oilseeds and by-products from Russia to other countries is carried out mostly via seven seaports, of which two are deep water (Taman and Novorossiysk). For example, most of the veg oil is exported through these two ports given to their capacity to take the ships for transshipping up to 40 thsd tonnes of the produce. Herewith, Taman seaport has the largest storage capacities of liquid veg oils — up to 125 thsd tonnes, which makes it the largest seaport for transshipment of the liquid bulks, and vegetable oils in particular, and of oil meals.

— EFKO owns the deep water terminal in Taman seaport. Can You please tell about the loading capacities of the port, and how had the volumes of the shipments changed in recent years?

As I have already said, Taman seaport is one of the largest Russian seaport in terms of the shipment of liquid bulks. For example, in recent years the shipments of the crude veg oil were mostly increasing. In particular, if in 2015 the export of the product totaled 236 thsd tonnes, in 2018 this figure totaled 459 thsd tonnes.

By the end of 2018, the general carryover volumes in Taman seaport on terms of veg oils and meals shipments in total exceeded 1.4 mln tonnes, including more than 700 thsd tonnes of the veg oils imported. This was possible at the expense of the modern equipment with high loading instruction of the port and the managements system with the high ecological security, and due to the certified laboratory, which maintain control of the produce with accordance of the standards and ISO methodology.