The grain-season-2014/15 is almost completed, and the market participants traditionally met to draw up its balances, and discuss the forecasts for the new 2015/16 MY, in the sea capital of Ukraine - the city of Odessa. So, the International conference "Grain Forum & Maritime Days -2015” took place in Odessa on May 28-30. Of course, the Forum venue was not chosen by accident. It should be noted that the ports of Odessa oblast ship 2/3 of the general volume of grain exports from Ukraine. And, of course, Odessa itself plays rather significant role, which always attracts not only with its hospitality, local flavour, wash of the waves, but also the development prospects for business, because the city is the export capital of Ukraine.

In the current year, the conference was held in a new format: APK-Inform Agency and the International Law Offices Interlegal combined their two annual events - Grain Forum and Maritime Days in Odessa, thereby founding the excellent platform for effective dialogue between participants of the grain market and representatives of logistics companies, which are closely linked.

It is worth noting that the ending grain season faced new records and events, including the reporting conference event. "Grain Forum & Maritime Days -2015" can be considered as the record and special event. In the current year, more than 500 representatives of the grain and maritime business from 26 countries became participants of the conference. 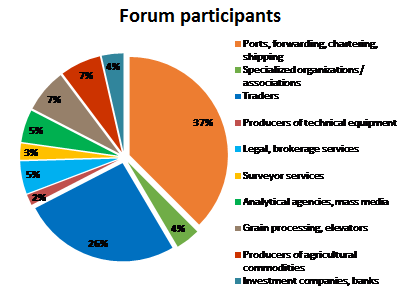 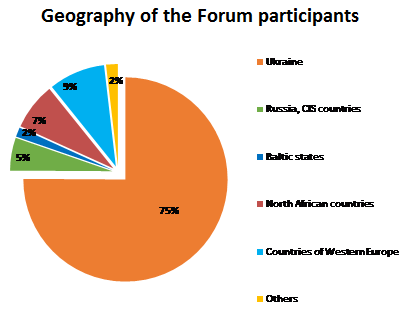 So, since 2014 the grain market of Ukraine has developed under the influence of new factors, which have significantly consolidated its influence since the beginning of 2015, and complicated any forecasting on further development of the market. On the one hand, the market is developing under influence of the global market environment, on the other hand - under the impact of production costs increase, caused by the significant devaluation of the national currency rates. In addition, during the recent half year Ukraine faced a new agricultural policy, which influence on development of the grain market is difficult to estimate to date.

But the Ukrainian grain sector continues developing against all odds, and increasing the volumes of export trading. If in the beginning of the 2000s, the export article in the supply and demand balances of grains totaled 15-20% of the production volumes, then in the season-2014/15 the index reached 55% (up almost 10% compared with the index in 2013/14 MY), which became the absolute record for Ukraine. According to the report of Rodion Rybchinskiy, Head of Business Projects Division of APK-Inform Agency, the certain factors contributed to such dynamic development of grain export trading. To date, the exports of grains form the export policy of the whole country. For a long time, Ukraine produces much more grain volumes than it can consume. Taking into account the losses, which usually vary within 5-15% (depending on the weather factor), Ukraine produces the sufficient volumes of grains for both exports and domestic consumption. Therefore, all state standards for grains are targeted for exports, the whole industry of grain logistics, new elevators, being built in Ukraine in recent years, are oriented for exports, said R.Rybchinskiy. The expert specified the stable level of consumption, growing rates of grain production and its significant potential, increasing of the demand for grains on the global market, prospects for rising of foreign currency earnings, etc. as the major factors, influencing development of the export orientation of the grain market of Ukraine.

As for the forecast of grain harvest in the season-2015/16, R.Rybchinskiy noted that in 2015 the general harvest of grains and leguminous crops in Ukraine will reach 56.9 mln tonnes, down 11.5% compared with the record harvest in the previous season, which totaled 63.9 mln tonnes. Therefore, APK-Inform Agency forecasted some reduction of the export potential of the grain market of Ukraine in 2015/16 MY by 15%, to 29.9 mln tonnes.

The decline in exports of grain in the Black Sea region in the season 2015/16, in particular from Russia and Ukraine, in his speech also said the head of the commercial department Phaethon International Gennady Ivanov. According to him, in the Black Sea region grain cargoes is the main indicator of the freight, so the decline in exports will affect the freight rate index.

In the season-2015/16, there is expected some decline of the export volumes of grains in the Black Sea region, in particular from Russia and Ukraine, declared Gennadiy Ivanov, Head of chartering/commercial department at Phaethon International, during his report "Freight market of grain products in 2015-2016". According to him, in the Black Sea region, grain cargoes became the main indicator of the freight, so the reporting decline of exports will affect the freight index rates.

Ukraine is one of the largest suppliers of grains on the world market, and its development trends in the new season are quite important for all market participants. Daryna Kovalska, Agricultural commodities analyst at the company Macquarie Securities, highlighted the forecasts of the global market development in the new season focusing on formation of the price trends.

According to the analyst, in 2014/15 MY the grain and oilseed markets faced various factors contributing to development of both bullish and bearish trends, including weak underlying fundamentals, foreign exchange rate moves, logistics-related supply problems, and weather risks.

Increasing of the world stocks of grains and oilseeds became the key factor influencing the decline of prices. Also, D.Kovalska stressed that “assuming normal weather persists, we expect the bearish trend on prices will continue into mid-year, before tighter supply conditions for corn and wheat begin to shine through in the second half of the year. In the corn market, we believe that prices will get support once we see lower YoY corn crop harvests in the US, Brazil and Ukraine. We note, however, that El Niño could be beneficial to US yields, as usually it has historically delivered better pollination conditions in those regions. The strength of demand in the ethanol and livestock markets will, however, be supportive to prices”.

D.Kovalska said that similar to corn, the wheat prices will start recovering in the second half of the year, as tighter fundamentals in the 2015/16 season start to materialise, driven by lower crop production. The largest drop in output is expected in Russia, where financial difficulties and unfavourable weather at the start of the season will most likely reduce wheat production. Another threat for wheat supplies today is in eastern Australia, and the potential for an El Niño to see the region become critically dry as the crop reaches its crucial growth stages. Moreover, if Macquarie Securities sees stronger feed demand expectations and positive sentiment in the corn complex, this will likely bring up the entire grains complex, D.Kovalska specified.

Macquarie Securities expects for a decline in market prices of soybeans in the next few years, as farmers of United States and South America do not plan to cut oilseed production even when the downward price trend in the market. Thus, the downward trend will dominate the market, and demand for soybean is not likely to block the increase in its harvest in 2015/16 MY. Provided that favorable weather in the US and Brazil, soybean ending stocks in 2015/16 season will reach a record, summed up the expert.