High-oleic market is the market segment developing in rather evolutionary rates. Taking into account the production indicators on increasing of the volumes, and expanding of the export geography, the segment has all prospects to cover a significant share of the fat-and-oil industry. All previous seasons demonstrated that the interest in production and exports of high-oleic sunflower oil continue growing from year to year. To date, oilseed breeders and producers have high attention to the market segment.

However, despite the fact that the production and export volumes to high-oleic sunflower oil continue rising, many market participants have some concerns for the reporting market segment of the fat-and-oil industry. After monitoring of the market development trends, APK-Inform experts should note that the interest of oil-producing companies in processing of high-oleic sunflower seed is quite unstable, and mainly depends on the presence of stable and reliable markets of high-oleic oil.

According to the best global practices, the high-oleic market has the required potential for further expansion of the planted areas under high-oleic sunflower, high price premium compared with traditional sunflower and sunflower oil, which indicates the prospects for increasing capacities of the domestic market of high-oleic sunflower oil. As for the dynamics of the market segment, it is necessary to specify the real reason for such slow development rates of high-oleic market of Ukraine with such large-scale opportunities, and what are its future prospects?

Therefore, over 140 participants, representing more than 90 companies and industry organizations of the oilseed market from 13 countries, gathered in Kiev on September 15 within frames of the second international conference "High-oleic market: evolution of development", to discuss the trends and prospects of high-oleic sunflower market in Ukraine in detail, advantages and disadvantages of the market segment, current issues of the specific oilseed production and many other topics. The delegates arrived from such countries as Spain, Poland, the United Arab Emirates, France, Switzerland, etc. 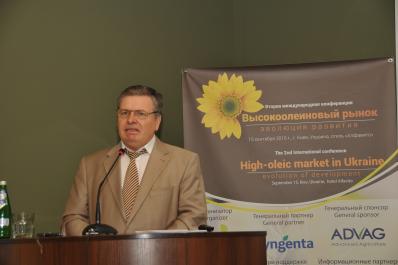 Guru of the fat-and-oil industry of Ukraine, the General Director at the Association Ukroliyaprom, Stepan Kapshuk became the first speaker within frames of the conference. The expert noted that in 2016/17 MY, Ukraine will remain the global leader in sunflower seed production with the figure of 13-13.5 mln tonnes, an increase of 1.8-2.3 mln tonnes (up 16.3-20.7%) compared with the previous season volumes. According to him, almost complete processing of sunflower seed on the domestic market of country, due to the current export duties, form the major reason for such growth of production. In the current economic conditions, many Ukrainian agricultural producers relied on sunflower seed cultivation, taking into account that the oilseed is the most profitable agricultural crop in Ukraine. Also, high profitability stimulates sunflower seed production capacities in Ukraine, which in 2015 reached 80.3%, as opposed to 36.5% in the previous year, the expert said.

S.Kapshuk noted that in parallel with the growth of oilseed crops harvest volumes in Ukraine, in particular sunflower seed, the country continues expanding industrial capacities for the oilseed processing. During the period of the export duty on sunflower seed, the processing capacities for oilseeds in Ukraine increased from 2.5 mln tonnes in 1998, to 17.5 mln tonnes as of September 1, 2016, or up 7 times. The production base of fat-and-oil enterprises allows processing the harvest volumes of all oilseed varieties produced in Ukraine (sunflower seed, rapeseed, soybeans, flaxseed, etc.), added S.Kapshuk.

Representatives of Syngenta, Luis Carlos Alonso and Sergei Tymoshenko reported in detail about the prospects of high-oleic industry. By 2020, the growth of the global demand in high-oleic oil will make agrarians to replace nearly 1 mln ha under traditional sunflower with high-oleic sunflower areas. In the current year, the global consumption of high-oleic oils continues growing (the average annual growth rate totals 6.5%), but the index somewhat reduced compared with 5 recent years, when the figure totaled 9.05%, said Luis Carlos Alonso. Furthermore, he suggested that high-oleic oils can take the place of nearly 70% of palm oil used in the food industry, especially sunflower high-oleic oil. The market expects for a new wave of searching for palm oil replacers after 2017. First of all, increasing concerns of the leading market brands for their reputation and dangers of palm oil for human health will cause such situation development, as well as entering into force in December 2016 of the new EU requirement for labeling of food products with obligatory reference to the fats content, said the expert.

The Vice-President of commerce at AgroGeneration, Kateryna Konashchuk reported about the factors influencing the production volumes of high-oleic sunflower in Ukraine, as well as the cases of its cultivation. As for the market factors, K.Konashchuk mentioned stable growth of profitability of high-oleic sunflower production in Ukraine, as well as rather attractive price premium for oilseed producers, due to good yield indices and high levels of oil content. In addition, the continuing growth of the global consumption of vegetable oils with high content of oleic acid, increased global market demand for new types of vegetable oils, and popularization of healthy lifestyle in many countries, will contribute to development of good prospects for the growth of high-oleic sunflower seed production in Ukraine. 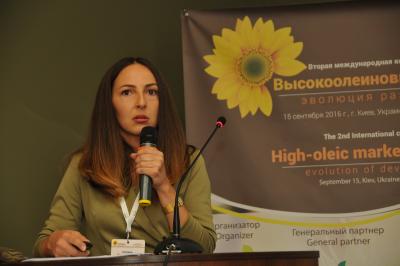 In terms of the current situation on the global market of high-oleic sunflower oil, when the market segment demonstrates noticeable reduction of activity from major customers, fall of bid prices for the product, as well as purchasing prices for the raw material and price premiums, in 2016/17 MY Ukraine will be able to process at oil and sell nearly 60% of high-oleic sunflower seed produced in 2015/16 MY, forecasted the oilseed analyst. According to her, Ukraine will process at high-oleic oil and sell 60% of the oilseed harvest volumes, namely 274 thsd tonnes (up 50% compared with 2015/16 MY). The remaining volumes will be sold as usual sunflower oil or some blend of oils. At the same time, J.Ivanitskaya assumed that in terms of more favorable market conditions, the processing capacities can reach even larger indices, taking into account that the existing potential in Ukraine allows increasing the processing volumes of high-oleic sunflower by nearly 200 thsd tonnes. In the current season, Ukraine can potentially produce and export nearly 200 thsd tonnes of high-oleic sunflower oil, depending on the global demand for the product.

The Consultant at Agritel International, Oleksandra Suslova reported about the latest trends on the market of sunflower seed and sunflower oil in Ukraine in 2016/17 MY. According to Agritel forecasts, the prospect of record harvest volumes of sunflower seed in Ukraine will have its critical pressure on prices, despite the large number of processing enterprises in the country, said the expert. In addition, O.Suslova mentioned that strengthening of the Argentinean positions on the global market of sunflower will also cause decline of prices in the market segment. The expert added that despite the expected record harvest volumes of sunflower seed in Ukraine, its qualitative indices are open to question.

While summarizing the conference results, we can surely say that the subject matter of the event will continue expanding, and interest in the market segment will also grow.

On behalf of APK-Inform team, I express sincere gratitude to the partners and sponsors of the conference for their help in organizing and realization of the event.

Anna Platonova, Head of the organizational committee of the conference