KazOil 2017 — Kazakhstan in the spotlight of the global oilseed market

For several recent years, the fat-and-oil market sector of Kazakhstan faced the significant growth rates — expanding of the production and export volumes of oilseeds. Due to the supportive government policy directed on diversification of the crop planted areas, and subsidy assistance for cultivation of oilseeds, the country managed to reduce the share of imports and started developing the processing industry. To date, the global market is familiar not only with Kazakh grains, oilseeds and flour, but also with sunflower oil. 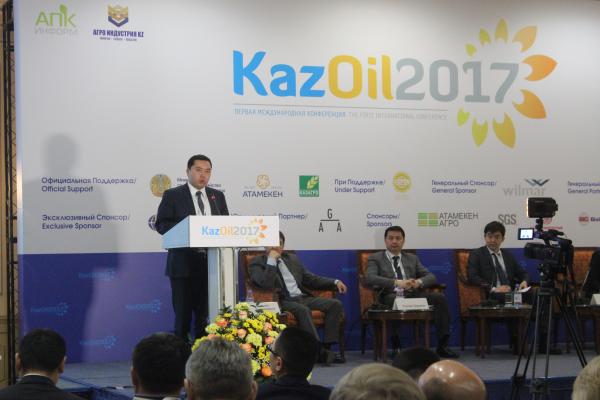 Several well-known Kazakh and foreign experts took part in discussion of the pressing issues, including the Senior economist at the consulting company LMC International Ltd (United Kingdom), Joseph Feyertag; the General Director on sunflower oil trading at Wilmar China (China), Fang Gang; the Head of the Department of raw materials and industry market analysis at Solnechnye produkty LLC (Russia), Vladimir Zhylin; the National consultant at the Food and Agriculture Organization of the United Nations (FAO) (Kazakhstan), Sayat Shortan; the Chairman of the association of legal entities "Grain Union of Kazakhstan", Nurlan Ospanov, as well as representatives of the Ministry of Agriculture of the Republic of Kazakhstan, the holding KazAgro, Kazakh and foreign producers and processors of oilseed crops and fat-and-oil products.

In the following paragraphs, we will highlight a few key messages announced during the conference.

By 2021, Kazakhstan plans to increase the planted areas under oilseed crops to 3 mln ha, within frames of the Programme for development of the agro-industrial complex for 2017-2021 period, declared the Head on technical regulation of the Department of veterinary and phytosanitary security at the Ministry of Agriculture of Kazakhstan, Zeinulla Sharipov during his report within the event.

The exports of oilseed crops and vegetable oils usually continue steadily growing in terms of stable demand rates. In 2016, Kazakhstan increased the exports of vegetable oils in 1.5 times, compared with 2012, and for nine months of 2017 the production volumes of vegetable oil exceeds the figures of 2016 by 16%, he specified. According to Z.Sharipov, the fat-and-oil industry has a great potential for the production of competitive and high-quality export-oriented products, and its development is fully dependent on the growth of production of raw materials and the qualitative indices of oilseeds.

The National consultant at the Food and Agriculture Organization of the United Nations (FAO), Sayat Shortan noted that in 2016, Kazakhstan increased oilseeds production volumes in 4 times compared with 2006. In particular, in the reporting period the harvest volumes of rapeseed increased in 2.7 times, sunflower seed — up 2.8 times, soybeans — up 3 times, and flaxseed — up nearly 105 times. According to the expert, the share of oilseed crops in the structure of plant growing production in Kazakhstan increased from 2.9% in 2006, to 6.9% in 2016.

Also, in the case of even earlier period, the growth of oilseed crops production reached 13 times compared with the figures of 2000. At the same time, in 2016 the production of vegetable oils increased in 6 times, to 325.4 thsd tonnes, said S.Shortan.

S.Shortan noted that for 10 recent years, Kazakhstan managed to increase vegetable oils production in 1.5 times. At the same time, Kazakh oilseed processors still prefer working with sunflower oil, which production in 2016 increased in more than 1.7 times compared with 2006, to 246.1 thsd tonnes.

To date, in Kazakhstan the production capacities for oilseeds processing by plants at work total nearly 1.6 mln tonnes per year. At the same time, their loading capacities reach 42% only, declared the Chairman at the association of legal entities "Grain Union of Kazakhstan", Nurlan Ospanov during his speech.

According to him, the country has a great potential for the growth in production of fat-and-oil commodities, which have a very high added value level. The reporting indicators characterize a very high investment attractiveness of the industry, however there is a threat of non-supplying of oilseed raw materials to all enterprises.

N.Ospanov specified that according to the available information, to date the country still continues constructing new plants with the joint production capacities at 1.5 mln tonnes per year. Thus, the general production capacities in Kazakhstan will reach nearly 3 mln tonnes per year, which will exceed the actual harvest volumes of oilseeds in the country. Therefore, Grain Union of Kazakhstan proposed to limit the current practice of new plants construction under the public support, and try to provide oilseed raw materials to already working capacities, the expert added.

According to the expert, by 2021 in Kazakhstan the growth of oilseeds planted areas will reach 4.4 times compared with 2007, at the expense of reducing the planted areas under wheat by 25%.

Also, F.Gang specified that the insufficient production volumes of domestic soybeans production resulted in the situation that China remained the absolute leader in the imports of the oilseed, which rates increased in 7 times for 16 recent years — from 1.32 mln tonnes in the season-2000/01, to 9.2 mln tonnes in 2016/17 MY.

In addition, the demand for other vegetable oils on the domestic market of China still continues growing, including flaxseed oil. The annual growth of import rates of the product totals 22%. Kazakhstan is the key supplier of flaxseed oil to China. The parties conclude the most attractive contracts under DAP terms. 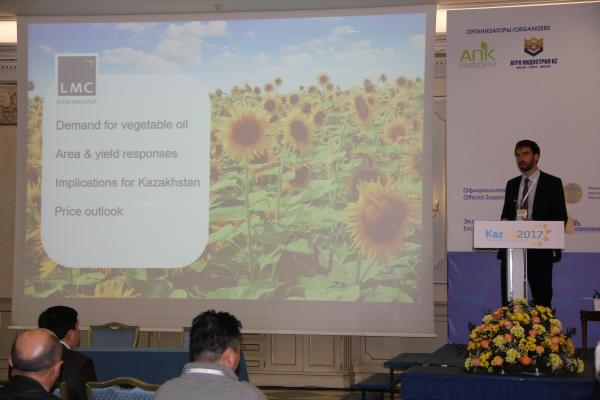 At the same time, the Senior economist at the consulting company LMC International Ltd, Joseph Feyertag focused on some reduction of the annual growth rates of the global consumption of vegetable oils, which in the period of 2017-2030 will total 3% only, as opposed to 5% in 2010-2017. The expert specified that the rapidly developing biofuel industry will mainly demonstrated the reporting downward trend in the annual growth of the global demand for vegetable oils. In particular, in the period of 2017-2030 the usage of vegetable oils in biofuel production will increase by nearly 2% only, while in the period of 2010-2017 the figures totaled 10%, and in 2000-2010 — 15%. 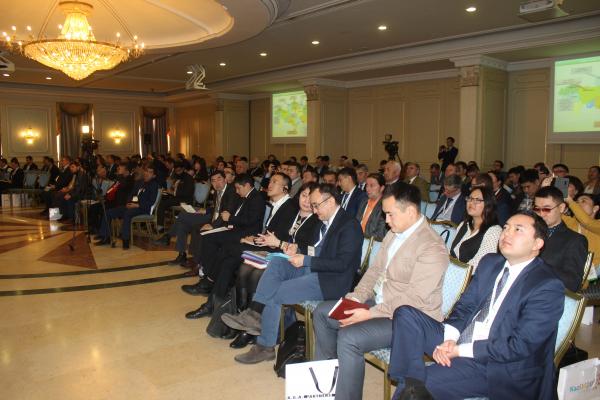 Except for the market trends, the conference paid much attention to discussion of the issues of modernization of the fat-and-oil industry of Kazakhstan, new export opportunities, investment attractiveness of the agro-industrial complex, as well as various technological, logistical and legal features. Speakers and delegates of the conference held an active discussion not only during the sessional part, but also during breaks and on the sidelines, considering the further prospects, establishing contacts for new cooperation.

The first panel discussion held in Kazakhstan between members of the oilseed market from 17 countries succeeded, and laid the foundation of a new tradition — every year in late November, Astana will become the center of the global oilseed market. 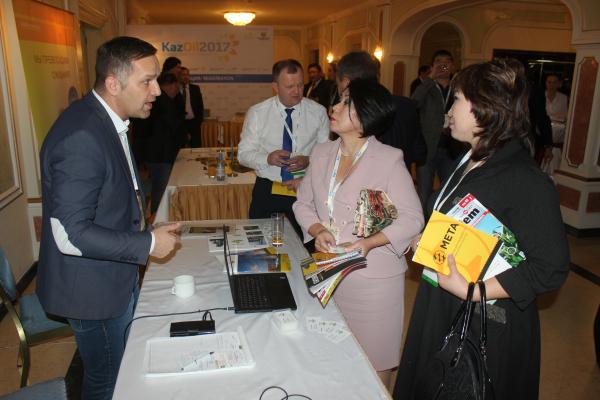 On behalf of the event organizers, we give thanks to all sponsors, speakers and participants for their active position and support of our idea to hold the international oilseed conference in Kazakhstan. KazOil 2018 waits for the participants in Astana on November 28-29! 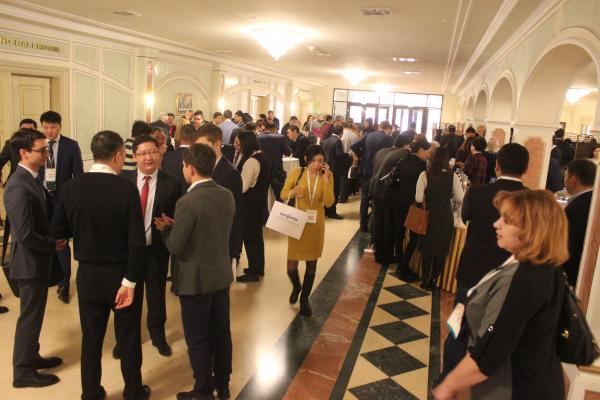