At the end of September 2019, the cultural capital of Turkey — Istanbul — became the spotlight for the leading representatives of the grain and oilseed businesses from 19 countries. On September 19-20, the third international conference KazakhGrainExport 2019 took place in Istanbul. The event mainly focused on development of the Kazakh market of the key agricultural crops, and promotion of Kazakh agricultural products on foreign markets. In addition, within frames of the event the guests were able not only to hear the reports of the speakers, but also take part in the robust discussion on the major challenges of the industry. 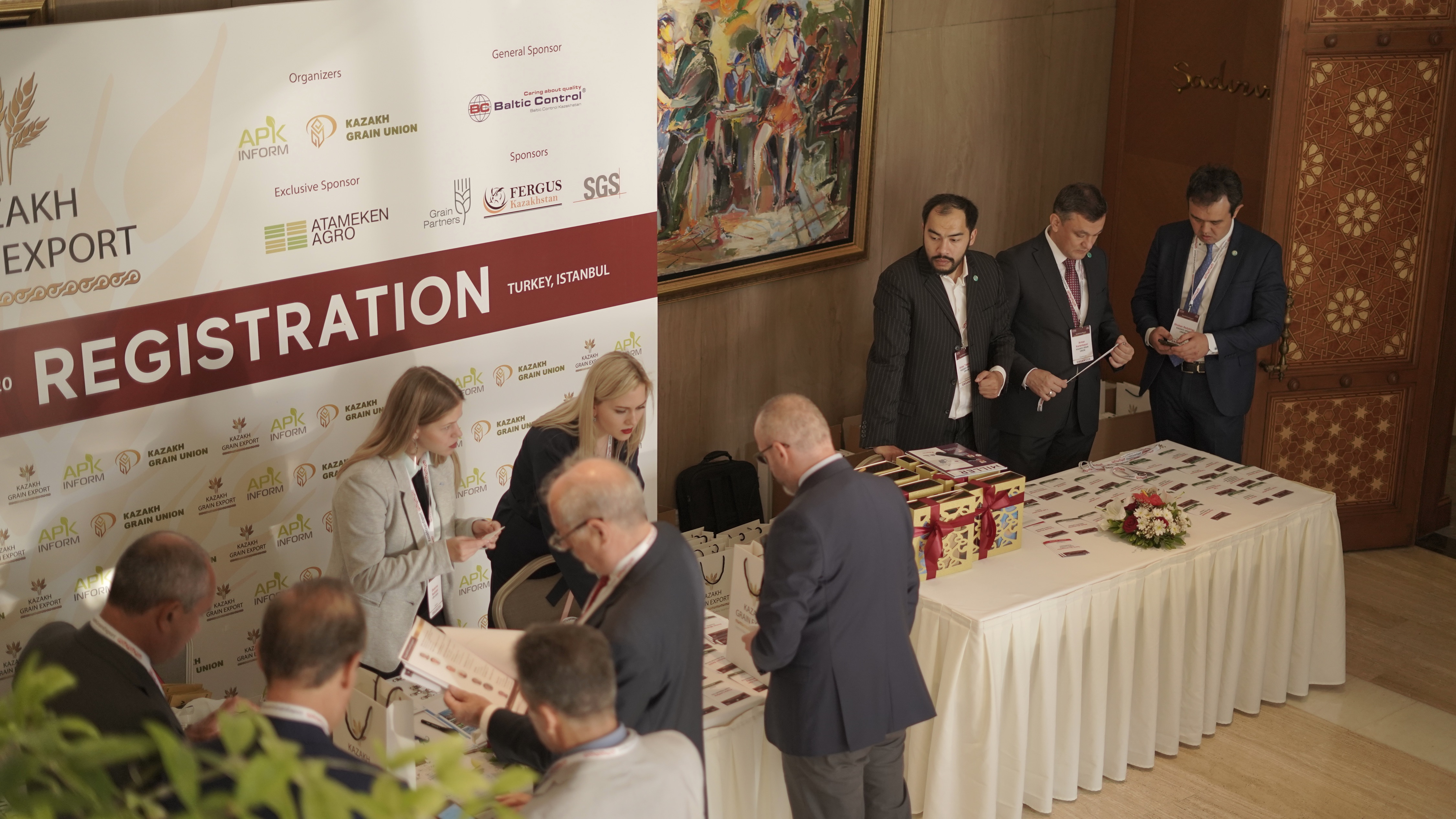 As a reminder, last year the second international conference KazakhGrainExport was held in Kazakhstan, in Nur-Sultan, on September 28-29. It became the large-scale event, which focused exclusively on the grain market, in particular the durum wheat segment, and gathered together nearly 100 delegates from 9 countries. Taking into account the dynamic development of the grain and oilseed sectors of Kazakhstan, and the growing global interest in the market of pulses, the organizers of the conference — the association of legal entities "Kazakh Grain Union" and APK-Inform Agency — significantly expanded the list of topics of the event in the current year, which led to the final idea of holding KazakhGrainExport 2019 in Istanbul. 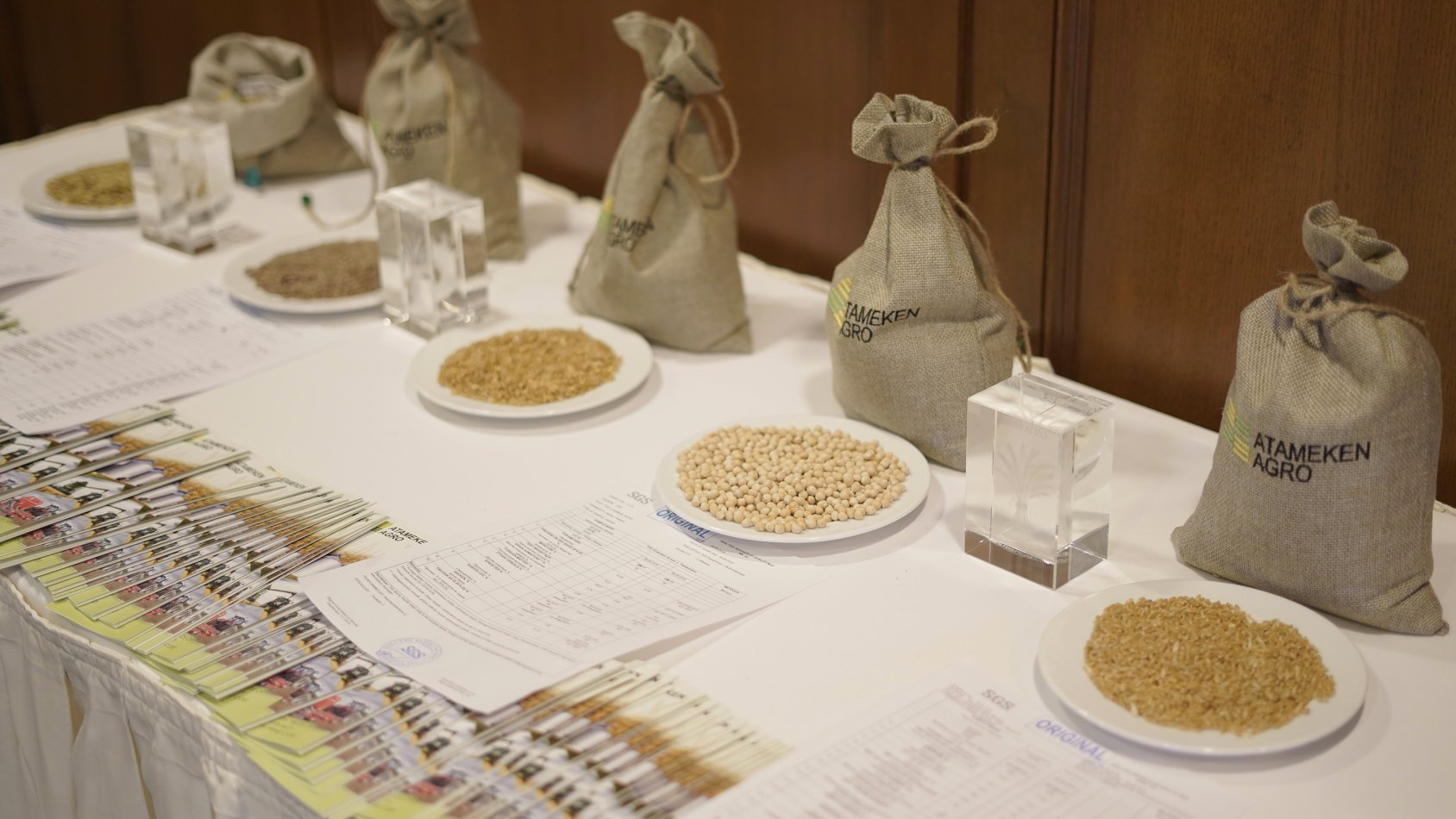 In the current year, the conference agenda was divided into two units — Grain Export and Oilseeds&Pulses. The first day of the event focused on the development trends of the global and Kazakh markets of wheat and barley, the qualitative characteristics of the major grain crops, as well as trade prospects. On the second day, the markets of major pulses and oilseeds became the key topics, as well as the conference participants received the excellent opportunity to discuss the prospects and troubles of trade on the reporting markets. It should be noted that more than 190 delegates from 19 countries became guests of KazakhGrainExport 2019. In particular, the participants from Turkey, Russia, and Italy showed the special interest in the conference. 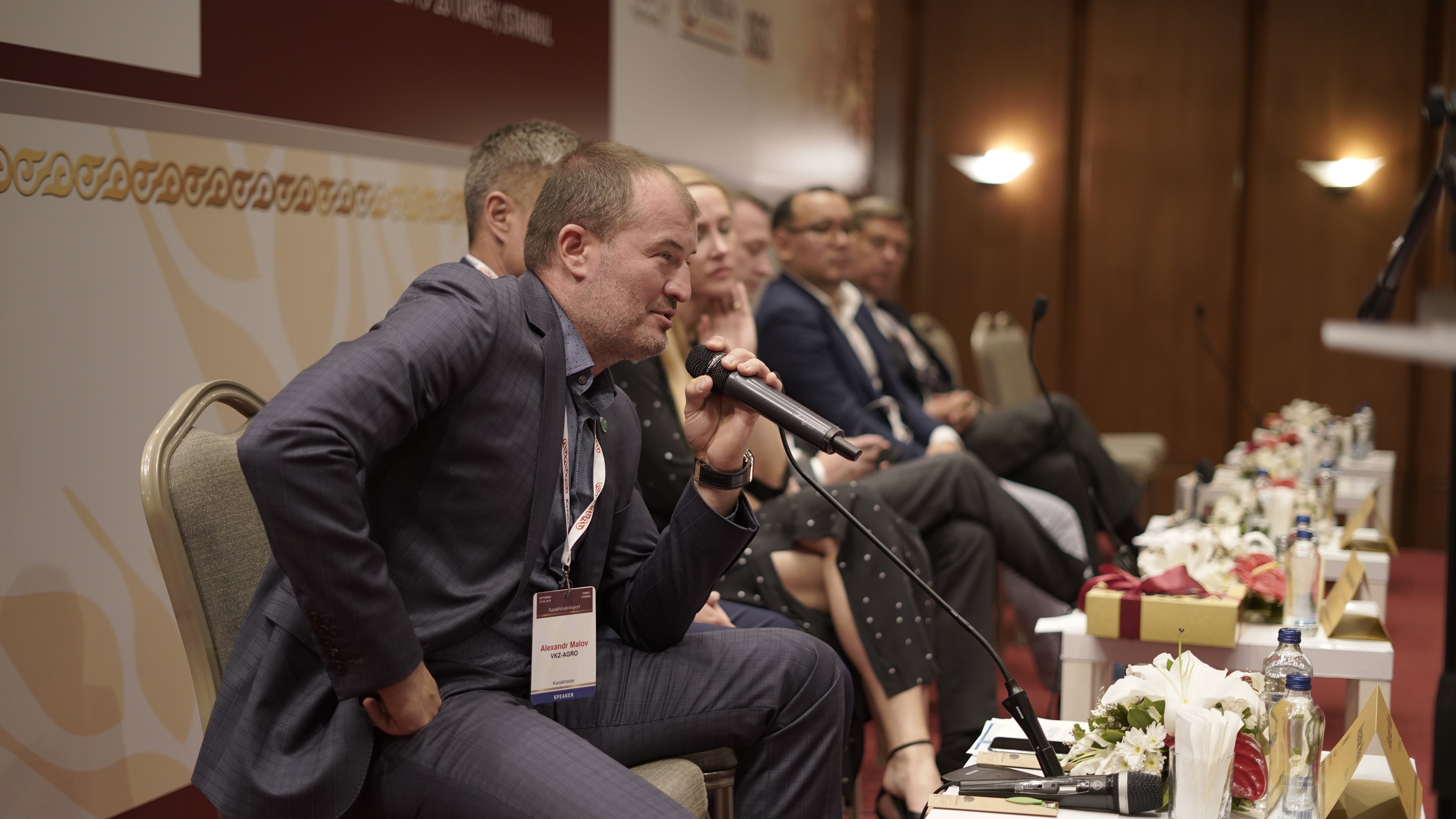 The Ambassador Extraordinary and Plenipotentiary of the Republic of Kazakhstan in the Republic of Turkey, Abzal Saparbekuly and the General Manager at Turkish Grain Board (TMO), Ahmet Güldal became the special guests of the conference, and made the welcoming speeches at the official opening of the event, as well as highly appreciated the agenda and professional level of its organization. Also, the Chairman of the Kazakh Grain Union, Nurlan Ospanov and the Editor-in-chief of APK-Inform Agency, Elena Cherednichenko made their welcoming speeches.

The first session of the conference was dedicated to the global wheat market and the main trends of 2019/20 MY. In particular, the Senior Economist at the International Grains Council, Nathan Kemp reported about the key global trends in development of the wheat market in the current season, and the leading players in the grain segment.

At the same time, the Deputy General Director at Baltic Control Kazakhstan LLP, Daulet Zhampeiis reported about the qualitative characteristics of wheat of Kazakh origin in the current season. 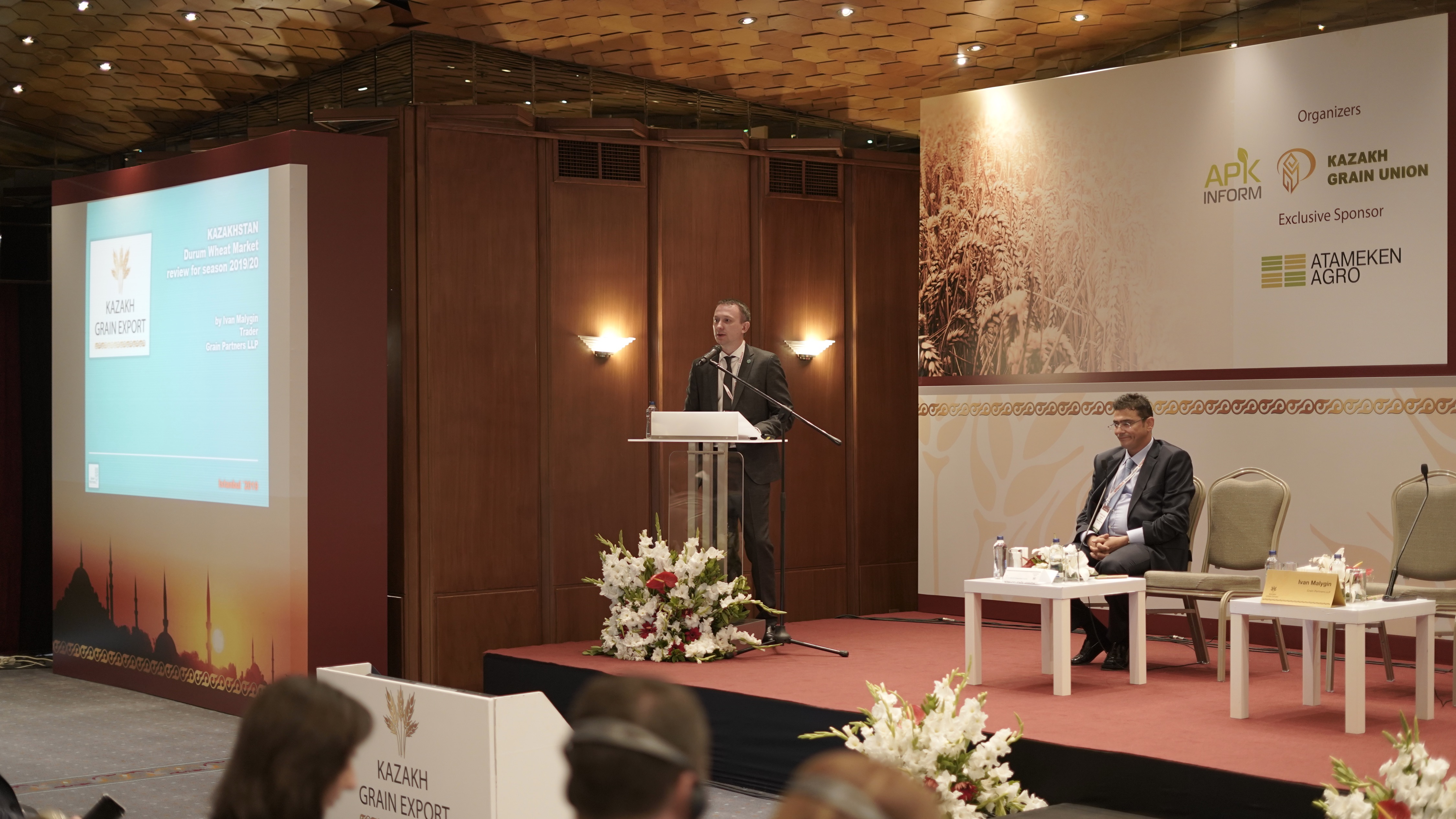 During the second session, international experts focused on the durum wheat market, and the issues of the global trade with the grain. The report of the Trader at GrainPartners LLP, Ivan Malygin focused on the issues of durum wheat production in Kazakhstan, as well as the export trends. In 2018, Kazakhstan harvested over 730 thsd tonnes of durum wheat throughout the areas of 481 thsd ha. At the same time, three oblasts of the northern part of the country produced 92% of the grain volumes — North Kazakhstan (38%), Akmola (28%) and Kostanay oblasts (26%), According to him, due to reduction of the areas under durum to 430 thsd ha, in the current season the grain harvest volumes will reduce to 559 thsd tonnes. The expert added that the unfavourable weather conditions contributed to reduction of the yield of hard wheat to 1.3 t/ha, against 1.52 t/ha recorded in 2018.

Also, the agenda gave the special attention to the prospects of trade with Kazakh durum wheat in the European Union, especially in Italy. Thus, the Senior Analyst at Areté Research and Consulting, Filippo Bertuzzi, due to reduction of the planted areas in the EU in 2019 to the lowest level for 6 recent years (to 2.26 mln tonnes, according to estimations of Areté Research and Consulting), and in terms of the low yield of durum wheat (down 10% y-o-y), the EU countries will increase the grain imports, in order to ensure the domestic consumption to the extent required. According to him, Italy is the main importer of durum wheat in the EU, and can increase the grain imports by 41% y-o-y — to 1.6 mln tonnes. At the same time, in 2019/20 MY there can be applied additional requirements for the supply of durum in the EU. Namely, the requirements will concern the qualitative characteristics (using of glyphosate in wheat cultivation), and labeling on the finished product of the country of origin of raw materials. Also, F.Bertuzzi noted the main characteristics of the durum market in Kazakhstan, which is one of the key countries-suppliers of the grain to the EU.

Also, we should highlight the development trends of the durum wheat market in Russia, which the Deputy Director at Zlak-Service LLC, Alexey Rybnitsky reported about. According to him, the positions of Russian hard wheat in the global supply and demand balances are very insignificant, as opposed to soft wheat. The general production of durum wheat in Russia is estimated at nearly 700 thsd tonnes, a decrease of less than 2% compared with the worldwide production of the grain. The export shipments of durum wheat are not too large. They usually take place in the period of October-February, in small batches of 3-5 thsd tonnes, and the general monthly volumes vary within no more than 10 thsd tonnes. 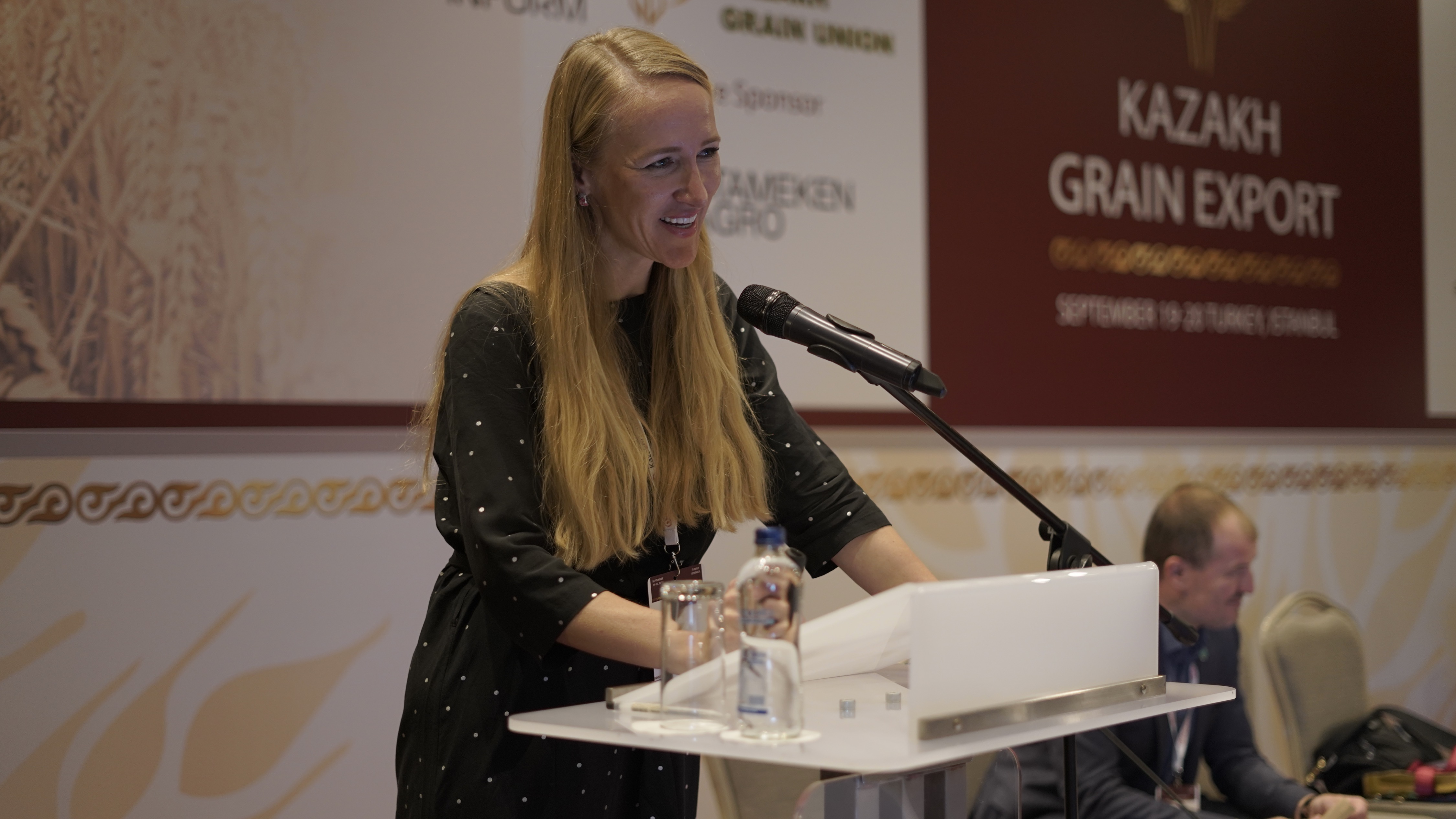 During the third session, experts informed about the recent trends in development of the barley market. The Grain market expert, and Senior Manager Sales CIS at PETKUS Holding GmdH, Natalya Skuratovich made a report on the main trends of the global barley market, spoke about development of the demand for the grain in the key countries-importers, such as China, Saudi Arabia, and Iran, especially in terms of the unstable political situation in the reporting countries, the outbreak of African swine fever (ASF), and the weather factor.

The moderator and speaker, the General Director at VKZ-Agro LLP, Alexander Malov reported Iran, Uzbekistan, Russia and China are the main export destinations of Kazakh barley. At the same time, China is the most prospective market for increasing of the grain export volumes in 2019. According to VKZ-Agro estimations, to date Kazakhstan can supply nearly 50-100 thsd tonnes of barley on the market. But in three years, the exports can reach 0.5-1 mln tonnes, the expert said.

Also, the conference agenda included the issues of Kazakh barley quality. The Deputy General Director at Baltic Control Kazakhstan LLP, Daulet Zhampeiis noted that since 2016, Kazakhstan started demonstrating the stable high qualitative characteristics of barley. Also, D.Zhampeiis added that according to the available information, in 2019 barley will also have a very high protein content (12.5-13.5%). The natural weight will be high, although somewhat lower compared with last year (650-670 g/l). 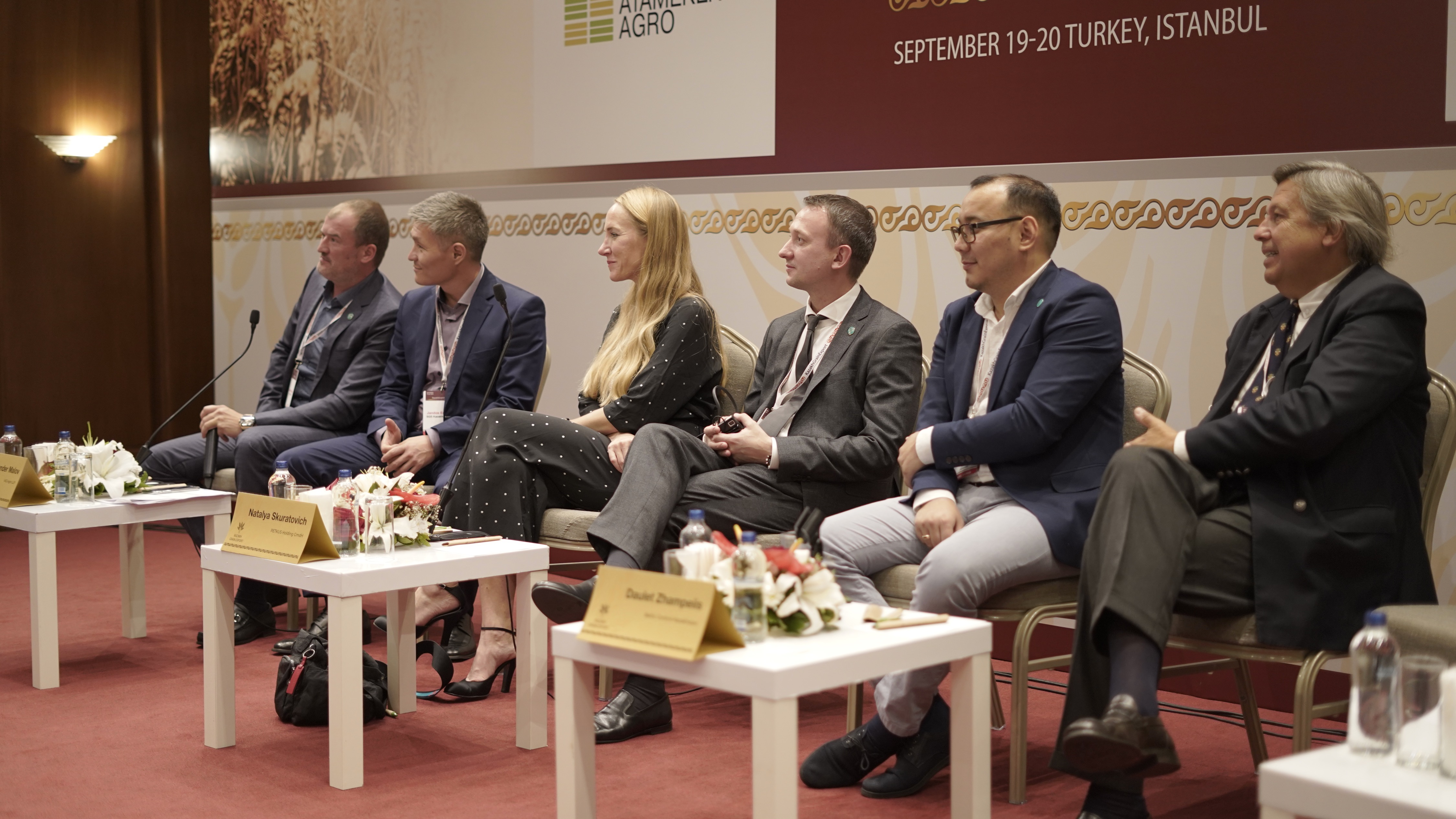 The final discussion "Demand on the global market of wheat and barley in 2019/20 MY, competition on the main sales markets", which was attended by all key speakers of the first conference day, generated the high interest of the conference participants. Of course, the global trade and Kazakhstan's potential to expand the export geography of grains were the most discussed topics.

Traditionally, the first day of the conference ended with the cocktail in honor of participants on the terrace overlooking the delightful Bosphorus.

Nevertheless, on September 20 the conference agenda continued, and the guests of the event received the rich session, which focused on the trends of the global market of main pulses and oilseeds.

The Member of Board of Global Pulse Confederation (GPC), President of PU "Community of Pulse Producers and Customers of Ukraine", Antonina Sklyarenko reported about the key global trends in the segment of pulses, competitors and trade partners of Kazakhstan. The Chairman of the Board at Arbel Bakliyat Hububat Sanayi ve Ticaret A.Ş., Ridvan Yuksel informed about the Turkish-Kazakh relations in the bean market segment.

The Chairman at Atameken-Agro JSC, Kintal Islamov told about the dynamics of peas production in Kazakhstan. According to the speaker, for three recent seasons Kazakhstan demonstrated rather positive trend in the production of peas. Although, in 2018 the dynamics of the planted areas under pulses somewhat stopped, but the areas and the resulting harvest volumes were still higher compared with many previous years: agrarians harvested 136.5 thsd tonnes of peas throughout the areas of 101.5 thsd ha, while in 2017 the harvest totaled 131.2 thsd tonnes, and the areas — 100 thsd ha, and in 2016 — 76.7 thsd tonnes throughout 60.5 thsd ha.

The report of the Founder of the group of companies Severnoe Zerno LLC, Expert of the Kazakh Grain Union, Evgeny Karabanov became one of the most eloquent speeches of the event. He reported about the markets of rapeseed and flaxseed in Kazakhstan, including the current condition and development prospects of the oilseeds production and exports. According to E.Karabanov, in 2019 the planted areas under flaxseed in Kazakhstan reached the record level — 1.287 mln ha.

The conference ended with the discussion of the most significant topics of pulses and oilseeds segment — from the global trends in the crops production to the trade positions and prospects of Kazakhstan on the global market.

On behalf of the organizers, we give thanks to all sponsors, speakers and participants for their active position, assistance and support to hold the international conference KazakhGrainExport 2019 in Istanbul. 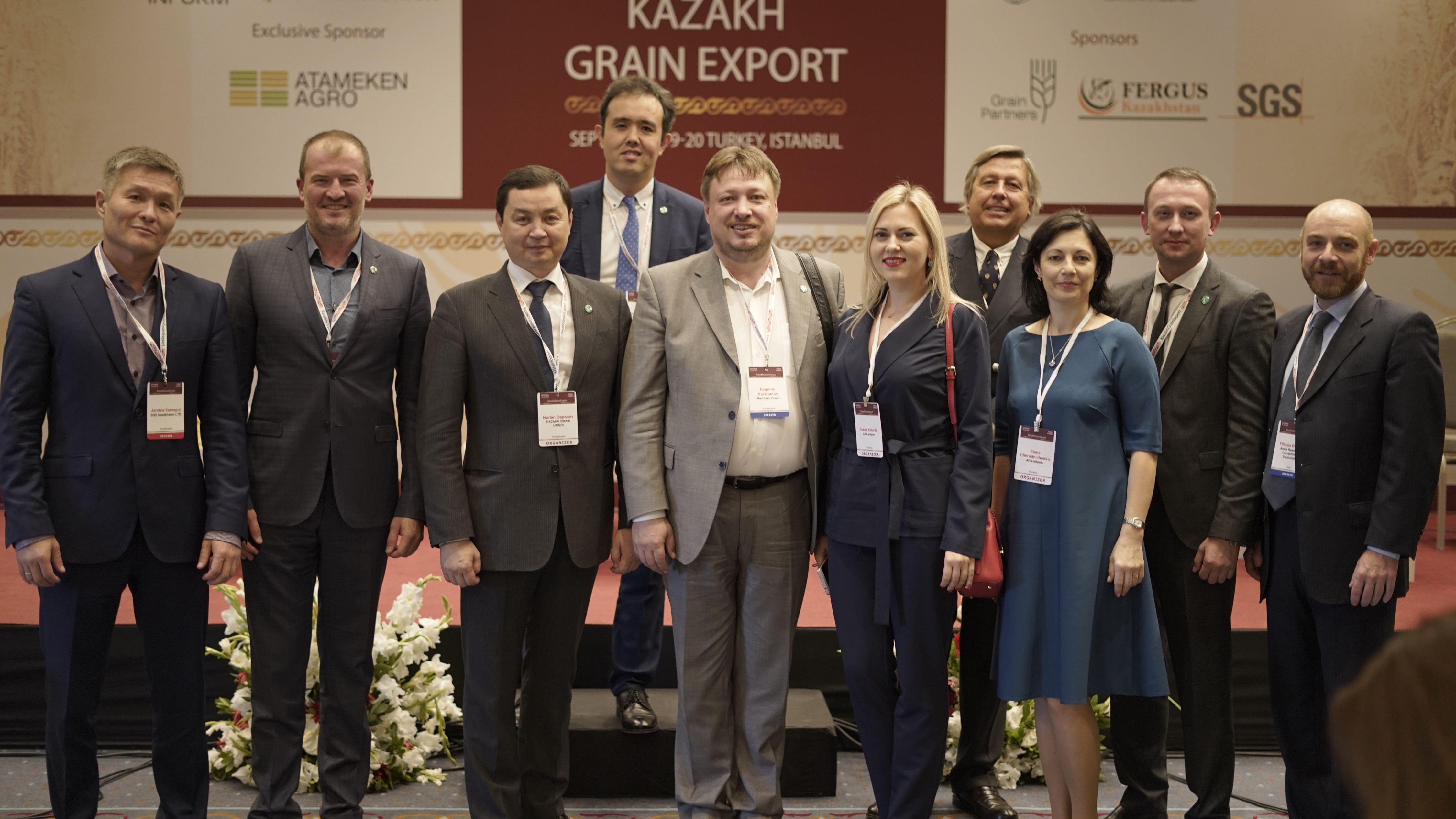