The President of the Association of Turkish Pasta Manufacturers (TMSD), Abdülkadir Külahçıoğlu will become one of speakers of the international conference "KazakhGrainExport 2019", to be held on September 19-20 in Istanbul, Turkey (Hilton Istanbul Bosphorus).

The expert will present a new report "Turkish market of hard wheat: current condition and prospects", within frames of the first session fay of the conference Grain Export.

As a reminder, Turkey is among the TOP-10 of countries-importers of Kazakh wheat, while it is the third largest importer of durum wheat after Italy and Russia, with the share of 14%.

According to the IGC experts, in 2019/20 MY Turkey will increase the imports of durum wheat to the maximum value for 4 recent seasons. In particular, the purchasing volumes will reach 600 thsd tonnes, up 100 thsd tonnes compared with the previous season, which also exceeds the maximum import volumes recorded in 2016/17 MY (577 thsd tonnes). 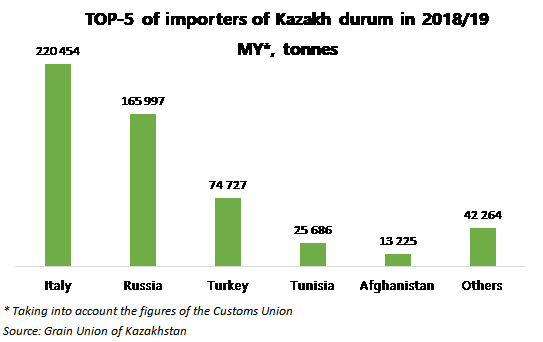 You can register to participate in KazakhGrainExport 2019, and get the unique opportunity to discuss the prospects of cooperation with the potential partners of both Turkey, and other countries-importers of durum wheat, as well as get acquainted and negotiate with Abdülkadir Külahçıoğlu.